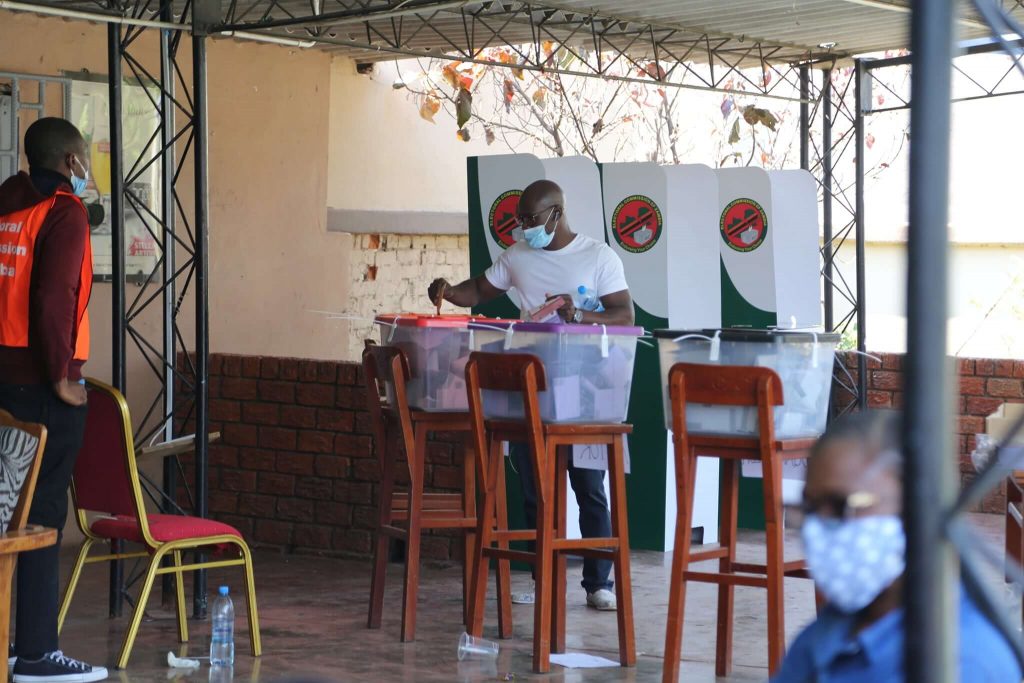 The Christian Churches Monitoring Group (CCMG) as part of our comprehensive monitoring of the 2021 elections deployed over 1,600 monitors and mobile supervisors to every province, district and constituency on Election Day. Today, we provide the preliminary findings on the conduct of voting and counting based on their reports from across the country. Reflecting that elections are a process and not just election day, we are also sharing a summary of pre-election issues. We will provide a more detailed assessment and evaluation of the pre-election period in our final report. We have completed our PVT and will release our PVT estimates for the presidential election following our analysis of the observation data and as appropriate. These estimates will allow CCMG to determine whether announced results are consistent with, and a reflection of, the ballots Zambians cast. CCMG continues to monitor the electoral process and we will make our overall assessment of the 2021 general elections once the process is complete.

Throughout the pre-election period, CCMG deployed 330 long-term observers (LTOs) to every constituency of the country to report on electoral preparations; the campaign and political space; implementation of COVID-19 mitigation protocols; politically-motivated violence and related acts; the use of government resources in campaigning; and partisan acts by traditional and religious leaders, among other issues. CCMG also deployed monitors to a statistical sample of over 1,000 registration centres during the voter registration process.

National Registration Card (NRC) Issuance: An NRC is required both to register and to vote and thus the issuance of NRCs is a critical part of the electoral process. The official mobile NRC exercise was conducted by the Ministry of Home Affairs (MoHA) from August through November 2020. The MoHA exceeded its target for NRC issuance during the mobile exercise, with over 1.5 million Zambians able to obtain an NRC, many of whom were first-time voters. However, the process was affected by: 58 unannounced mobile issuance exercises; lack of transparency on schedule and procedures; denial of access for CCMG monitors to NRC issuance centres; and unexplained large differences by province in issuance rates against MoHA official targets, with for example, Luapula having a success rate against the MoHA target of 181% and Western having a success rate of 52%.

Voter Registration: The ECZ determined to conduct an entirely new voter registration exercise for the 2021 elections. While Zambia has used both new and updated voter registries in the past and there are strengths and weaknesses to both, there was insufficient stakeholder engagement prior to implementation to build broader consensus and confidence in the process. The ECZ conducted voter registration from 9 November to 12 December with an extension from 17-20 December, which CCMG monitors documented largely adhered to procedures and resulted in very few questionable registrations of ineligible persons. The registration process resulted in a record of over 7 million voters included on the certified voters register. However, late announcement of the registration period, a shorter registration period than in the past, unreasonably long lines in some registration centres, significant disparities in registration centres staffing levels across provinces, lack of transparency about procedures, staffing and kit deployment and failure to provide CCMG monitors with detailed registration information were significant shortcomings in the registration process. The refusal to permit an independent audit of the register further undermined transparency and was a missed opportunity to enhance confidence in the final register.

Campaign Period: Politically-motivated violence has become disturbingly common, with CCMG monitors reporting over 70 incidents during the campaign period. Our monitor reports show that both PF and UPND members and supporters were the main perpetrators in politically violent acts in about a 2 to 1 ratio, respectively. While the police have largely allowed the violent acts to continue with impunity, they themselves have used excessive force on several occasions against UPND party members and supporters. CCMG monitors reported on 28 instances of the limiting of campaign space due to the Public Order Act or COVID-19 mitigation protocols, with almost all these limiting campaign space for UPND. On the eve of the election the President decided to deploy the military across the country, citing the need to control political violence. However, this measure could have had a positive or negative effect on citizens exercising their democratic right to vote.

ECZ Engagement and Information Sharing: The ECZ succeeded at organizing both registration and election day processes that largely adhered to procedures and had small numbers of ineligible participants. However, the ECZ did not regularly engage with civil society organisations (CSOs) on key electoral processes and inquiries for essential information about the electoral process either went unanswered or were responded to very late. In addition, transparency was reduced by the failure to share timely and comprehensive information about key electoral processes. Despite inquiries, the procedures and staffing and kit deployment plan for voter registration, voters registered at the end of each phase, procedures and deployment plan for the use of voter verification devices and Election Day procedures were never publicly shared. In addition, the very late announcement of accreditation procedures and requirements, some of which were new and burdensome, gave stakeholders little time to plan.

Media: While CCMG did not undertake media monitoring, we have reviewed the reports of MISA-Zambia on the issue. Those reports note that the media coverage of opposition parties, including UPND, was significantly less than that of PF. Particularly concerning was the inequitable coverage of political parties by the public broadcaster, the Zambia National Broadcasting Corporation (ZNBC), which is mandated to provide equitable coverage. In addition, the 2020 shutdown of Prime TV and the IBA finding of professional misconduct by Muvi TV raise serious questions about media freedom. CCMG met with both ZNBC and IBA to engage on these issues.

Political Use of the Legal System: During the runup to the elections, there were multiple arrests and charges filed against opposition party members or private citizens that either appeared to have a political motive and/or infringed upon their human rights. These cases set a dangerous precedent of using the legal system for political purposes.

CCMG’s preliminary findings are based on reports from a nationally representative sample of 1,500 polling stations located in every province, district and constituency of the country as of 12h00 on 13 August.

Accreditation: Election day accreditation for citizen monitors was unnecessarily burdensome and lacked uniform procedures across all districts. This was contrary to best principles stated by the Election Commissions Forum of the SADC Region to which the ECZ is a member. Despite these challenges, CCMG was able to accredit all 1,500 stationary monitors plus additional supervisors for Election Day. However, for 31 CCMG monitors, the ECZ did not provide them with an official accreditation card. On Election Day, several CCMG accredited monitors were initially not permitted into polling stations. While all but one of these issues were ultimately resolved, it delayed monitoring of the process in some polling stations.

Voter Verification Devices (VVDs): Polling locations with multiple polling stations have long posed challenges for voters as it may not be clear to voters which is their assigned polling station. This issue was exacerbated for this election as 907 of the 12,152 polling stations had duplicate names[1]. VVDs were used at approximately 13% of polling stations with the devices most common in Lusaka and Western provinces. While VVDs could potentially have played a role directing voters to the correct polling station, their late introduction served to raise predominantly confusion and concerns about their use on Election Day.

Violence: There were multiple acts of violence on Election Day. It was widely reported that the PF chairperson for North-Western province was killed and the former Mayor of Lusaka from PF was stabbed. CCMG condemns all political violence in the strongest terms, and those responsible for these acts must be held to account. There were also a number of confrontations where voters at polling stations believed that there were persons carrying pre-marked ballot papers in their bags. Long queues also resulted in several instances of disruptions in the queues at polling stations. Overall, though, incidents of harassment or intimidation were reported at 2% of polling stations, while incidents of violence at 3% of polling stations during voting and counting.

Internet Access: There were numerous reports of internet access being limited on Election Day. The global internet monitor NetBlocks[2] confirmed that social media platforms Twitter, Facebook, Instagram, and messaging apps Messenger and WhatsApp were restricted on multiple internet providers. Such internet shutdowns undermine transparency of the election process and curtail the right of voters to receive information about the elections.

PVT: CCMG informs all voters and contesting parties that we have our PVT estimates for the presidential election which provide independent non-partisan verification of the accuracy of official results. CCMG calls on ECZ to go above the letter of the law to of the be fully inclusive, transparent and accountable as they tabulate results; to only announce results that reflect the ballots cast at polling stations; and to release polling station level results to all election stakeholders in a single electronic file in accordance with Open Election Data Initiative standards[3].

Further, we encourage all Zambians to remain calm during the tabulation of results, and

we call on all political parties to avoid any actions that could heighten tensions as the official results are announced and to resolve any potential electoral disputes through peaceful means and legal processes. We also encourage the security forces to carry out their duty in an impartial manner without favour to anyone.

CCMG commends the voters who went to polls, often waiting in long lines, to exercise their right to vote. We note that many voters were young people likely voting for the first time. We also recognize the efforts of our fellow citizens who served as election officials at polling stations and made voting possible. Finally, we thank the more than 1,600 CCMG volunteers who diligently monitored voting and counting on behalf of all Zambia. All of your efforts together serve to strengthen our democracy.